On November 2nd, 2022, the NULab for Texts, Maps, and Networks hosted its 7th annual “Speed Data-ing” event, a research showcase that brought together colleagues and potential collaborators from across the Northeastern digital community. Attendees were treated to four presentations from scholars from various departments that dealt with a range of topics related to digital humanities and computational social science. This event is part of the DH Open Office Hours Series, to be followed by another panel of talks featuring recent research from the Northeastern community: the Fall Scholarship Celebration. Both events are co-sponsored with the Digital Scholarship Group.

Silvio Amir, an Assistant Professor in the Khoury College of Computer Sciences, and Yakov Bart, an Associate Professor of Marketing, presented on their project entitled “Characterizing the Impact of Influential Actors on the Dynamics of #MeToo Online Social Movement.” This project has compiled an impressive dataset of roughly 9 million tweets from 2015–2020, all using the hashtag #MeToo. The researchers are using this sample to study the engagement and impact of influential actors—for example, social media influencers and brands—on narratives and discourse in the social media life of a movement. Placing more traditional “influential actors” such as brands in comparison with “influencers” allows the researchers to investigate the differing impacts each class of influential actor has. The researchers hope to further investigate the social media activity of companies and brands during their sample period in order to better understand what else those brands focused on.

Assistant Professor of Philosophy and Computer Science Sina Fazelpour presented his research titled “Fair Explorations: The Structure and Dynamics of Responsible Research and Innovation Communities.” Professor Fazelpour considers questions relating to how institutions and organizations make decisions, specifically in the context of how diversity can benefit the epistemic performances of such groups. His research investigates the effects of homophily—the tendency to associate with similar others—on the performance of diverse groups, finding that a complicated mix of considerations needs to be understood. The first two projects presented were very much in dialogue with each other. As Professors Amir and Bart are working toward a better understanding of how social movements cohere and find allies, Professor Fazelpour is studying the impacts of homophily and diversity on organizations.

Gina Nortonsmith of Northeastern’s Snell Library gave the third presentation of the day on the Civil Rights and Restorative Justice Project, for which she is the Project Archivist. Hosted at Northeastern’s School of Law, the CRRJ is a digital project investigating and compiling resources about anti-Black killings in the mid-century American south. This project’s several components, including a searchable database on its website, provide researchers and family members with information on these murders geared to emphasize the personhood of the victims. This project poignantly and respectfully compiles as much information as possible on each victim and the circumstances surrounding each death. Visitors to the The Burnham-Nobles Digital Archive can interact with their records in several different ways, which Nortonsmith demonstrated live, that honor the victims as more than mere data points.

The final presenter of this event was Associate Professor in the Khoury College of Computer Sciences and NULab founding member David Smith. Professor Smith’s project, entitled “Re-Aggregating the Archive,” focuses on how new advances in Optical Character Recognition (OCR) and Handwritten Text Recognition (HTR) technology can assist in the investigation of photo morgues—newspaper photo archives—such as the Boston Globe’s. Professor Smith showed several examples of photographs, each of which had annotations with varying degrees of legibility on their reverse sides. This project attempts to overcome some of the difficulties inherent in relying on machine transcription, such as errors or illegibility in the writing—problems that any researcher who has relied on OCR in any project has struggled with. 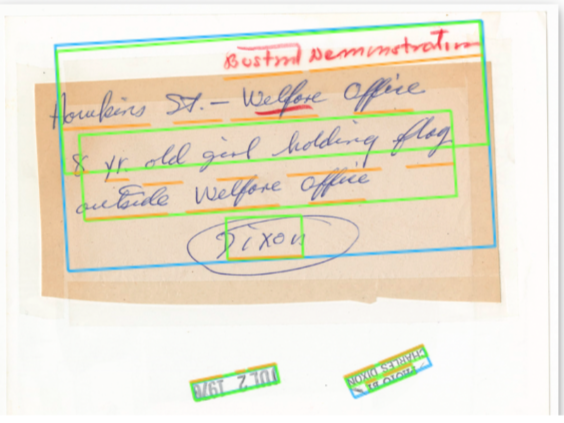